Typical batteries, like C or AA batteries, come with a container or case. There is a cathode mix moulded 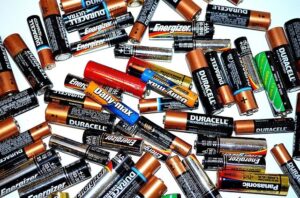 to the inside part of the case, which is conductors that carry a naturally occurring charge and ground manganese dioxide. Next is a separator. The paper prevents the cathode and anode, which has a negative charge, from coming into contact with each other. Inside each battery are an electrolyte (potassium hydroxide) and anode. The negative current collector is a pin that is normally made out of brass and is located in the middle of the battery case.

There are three components contained in a cell of every battery: two electrodes with an electrolyte in between them. Electrolytes are potassium hydroxide solutions in water. These electrolytes are the medium for moving ions inside the cell and they carry the iconic current within the battery.

Ups (uninterruptible power supply) are something that provides you power if your power source were to go down. If you would like to learn more, then look up a ‘UPS batteries‘ online.

Smaller or flashlight batteries, normally labelled D, C, AA, or A have terminals that are built into the battery ends. This is why your flashlight’s battery compartment has a – and + sign to make it easier to install batteries in the right direction. Bigger batteries, like on a car, have terminals extending out from the battery (which resemble big screw tops).

When a battery is connected to a circuit, this provides the alternative path that the electrons can follow. This causes the excess electrons to flow from the battery from the negative terminal, via the circuit, and back inside the battery by way of the positive terminal. This electrons flow is the electric current that provides your circuit with energy.

When a circuit connects the electrodes, the terminals inside your vehicle, or a flashlight, for example, the chemical inside the electrolyte will begin to react.

As electrons are flowing through a circuit, inside the battery the chemicals being to react with metals, and there continues to be a build-up of excess electrons on the negative electrodes. The electron continues to flow to attempt to even up things – as long as the current has a complete path. If the battery is kept connected for a long time to the circuit, all of the chemicals within the battery will be eventually used up and your battery will die (will not supply electrical energy any longer).